On August 3, 1778, a fire destroyed two blocks of shops and houses in lower Manhattan, laying waste to the majority of buildings on Cruger’s Wharf and half of the adjacent block north of Water street. Although the devastation paled in comparison to the inferno that occurred in 1776 during George Washington’s retreat from New York, the 1778 fire was still a destructive force that caused damage or outright destruction to approximately 60 houses and stores within this two-block radius. After the fire, the Superintendent-General’s Office issued multiple statements requiring all shingles and wooden materials rescued from the fire to be moved outside of the city boundaries, stating the danger of having them piled up in the streets and acknowledging the further threat that fire posed New Yorkers. Announcements were placed in the local newspaper, the Royal Gazette, for weeks following the blaze advertising both found and missing articles resulting from both the confusion that ensued during the chaos and blatant theft. One notice posted required the surrender of any goods immediately to the Mayor’s office and claimed that any person found to be detaining such goods would be “deemed guilty of theft and punished accordingly.”

Of the two blocks damaged during the Fire of 1778, the area north of Water Street was the site of the 7 Hanover Square project, an archaeological excavation that occurred in the early 1980s. This archaeological collection is currently within the NYC Archaeological Repository and the incorporation of artifacts from the site is ongoing.

Image credit: Grim, David. This Plan of the City of New York was made for the purpose of showing the progress and extent of the Great Fire which happened in the year 1776 the number of houses that was consumed. And also the Fire of 1778. Map. New York, 1863. From Princeton University. 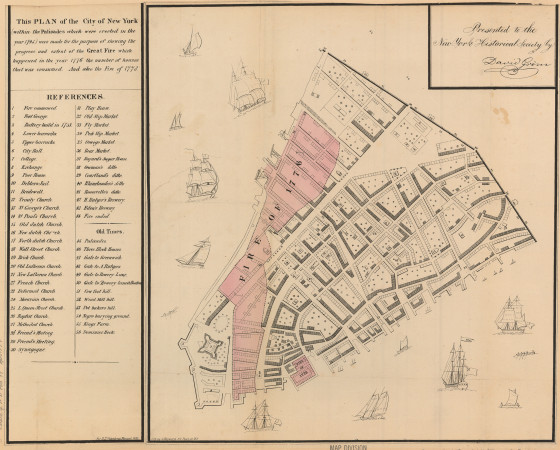