By the mid 1800s, New York’s skyrocketing population and incredible density were driving living conditions in the most crowded neighborhoods to new depths. Fire, disease, unsanitary conditions, lack of clean food and water, overcrowding, high mortality rates–all were regular features of everyday life, especially in the most notorious “tenement” houses of the Lower East Side. Starting in the 1860s and into the early 1900s, progressive reformers sought to alleviate dangerous conditions through the power of government, passing laws touching on everything from street cleaning to food safety. Perhaps the most ambitious effort involved housing conditions. The 1879 Tenement Act (often known as the “Old Law”, in distinction to the “New Law” of 1901) required that all buildings be equipped with fire escapes and that every room have a window facing fresh air and light. Many Old Law buildings have a distinctive “dumbbell” shape, to create airshafts allowing for the necessary extra windows. Source: Richard Plunz, A History of Housing in New York City (New York, 1990). Written by Dr. Brett Palfreyman 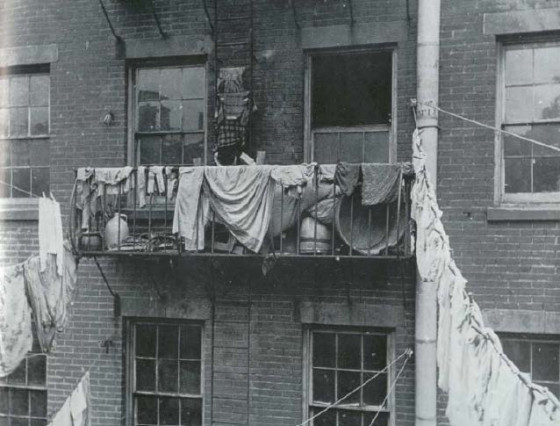