Though immigration has always been a primary source of growth in New York, the rate of arrivals has never been constant. One the early peaks surrounded of Irish Potato Famine, a devastating series of crop failures between 1845 and 1852 that killed a million Irish and drove another million refugees across the Atlantic. The potato blight, caused by a fungus-like organism, also struck other parts of Europe, but its effect was particularly devastating in poorest and most marginalized regions of southern Ireland. Those fleeing the famine arrived in the New World with almost no resources and few skills; their new lives in the crowded tenements and filthy streets of neighborhoods like the Five Points could be just as difficult as what they left. For New York, meanwhile, the arrival of hundreds of thousands of Irish had profound effects on the city’s demographics and character, contributing to the rise of the Catholic Church and the emergence of the Democratic political machine known as Tammany Hall. Source: Ronald Baylor and Timothy Meagher, The New York Irish (Baltimore, 1996). Written by Dr. Brett Palfreyman 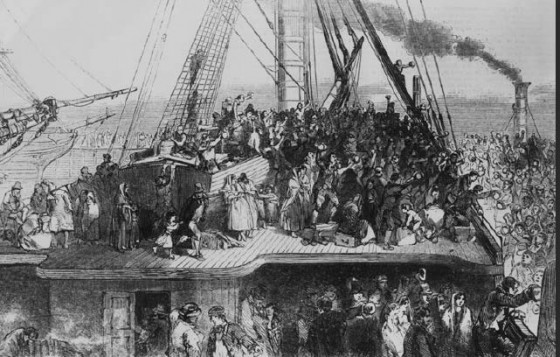