When English-born explorer Henry Hudson set out from Amsterdam on the 85-foot Halve Maen (Half Moon) in 1609, he did not intend on "discovering" the collection of bays, rivers, and islands we know today as New York. He was actually looking for the fabled Northwest Passage, a direct water route he hoped would connect European traders with the riches of Asia. After several months of probing the North American coastline, Hudson sailed through the narrow channel between today’s Staten Island and Brooklyn (the Verrazano Narrows) and up the river that now bears his name in September of 1609. Though he never found the path to the Pacific he was looking for, Hudson’s glowing reports of abundant animal skins and willing Native American traders were enough to convince his Dutch bosses to establish a trading post in the area a few years later. Corey Sandler, Henry Hudson: Dreams and Obsession: The Tragic Legacy of the New World’s Least Understood Explorer (New York, 2007). Written by Dr. Brett Palfreyman 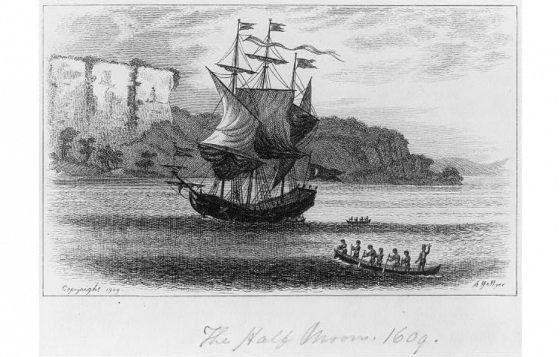