This project consisted of archaeological monitoring and testing associated with the reconstruction of the gazebo and the construction of asphalt pathways in Rufus King Park, located at Jamaica Avenue and 150th Street in Queens (Block 15005, Lot 1). Work was conducted for the New York City Department of Parks & Recreation through Quennell Rothschild & Partners, LLP, the project's landscape designers. Tasks included monitoring excavations associated with the removal and relocation of thirteen trees and shrubs, the installation of three new catch basins, and excavations deeper than 12 inches below grade in the park that surrounds the historic Rufus King Manor Museum on three sides. This last provision resulted in monitoring 35 fence post holes associated with the installation of railings along the park's 90th Avenue walk.

A single archaeologically significant resource was exposed at the transplant site of a large tree (Tree #74/Tr-1). This dry-laid stone feature (F1) proved to be a filled privy pit possibly dating from 1897 when the Town of Jamaica acquired the manor and 11.5 acres for a park after the death of the last King owner. Or it might date from 1898 when, following the consolidation of the five boroughs, it came into the citywide park system. An artifact grab sample of 405 artifacts from F1 coordinated with Parks' published reports determined the feature was filled after 1902. It is most likely, however, that filling occurred at least a decade later when a former King outbuilding was converted into a comfort station.

For more information, please see the report: Reconstruction of the Gazebo and the Construction of Asphalt Pathways in Rufus King Park, Borough of Queens: Archaeological Monitoring and Testing 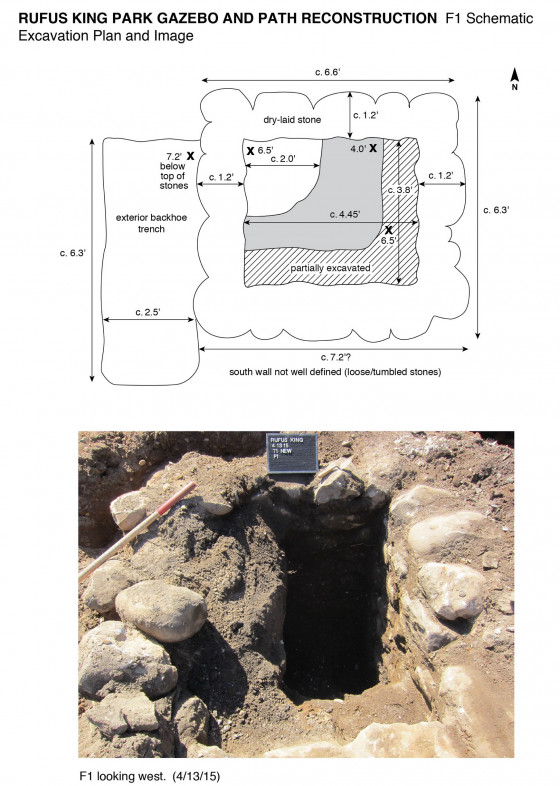