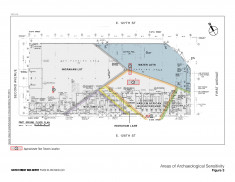 This site was once within the Dutch village of Nieuw Haarlem over 350 years ago which was built and maintained through the labor of enslaved people of African ancestry. From the late-1660s through the mid-19th century, the site was part of a burial ground associated with what was then the Reformed Low Dutch Church of Harlem.  It contained the burials of people of African ancestry. As the site was subsquently redeveloped multiple times, most recently in the mid-20th century as a bus depot, archaeological testing was completed in 2015 to determine what remained at the site.  That testing uncovered human remains.  A task force including the descendent church, the Elmendorf Reformed Church, as well as other community members has been working with the city to develop an appropriate path forward to memorialize the people who were interred at this site and this history.  In the meantime, the NYC Archaeological Repository is curating the remains and archaeological artifacts. For more information please see the  Phase IB Archaeological Testing Report